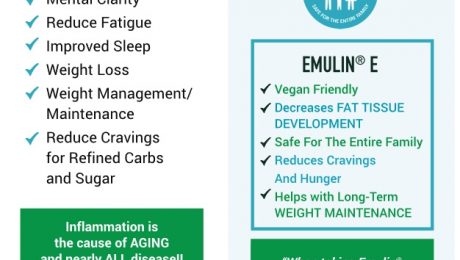 Inflammation is the primary cause of diabetes and its many associated complications. Type 2 diabetes is the most common form of the disease and occurs when the body can’t manufacture or release enough of the hormone insulin to adequate neutralize excess sugar levels in the blood. Research published in The Journal of Clinical Investigation demonstrated the relationship between inflammation and how it triggers insulin resistance.

According to the World Health Organization (WHO) an estimated 422 million people have diabetes. The condition has been referred to by various countries as a “national security risk” and “the greatest epidemic of modern times.” Poor diets, fast food, processed meals and a lack of exercise have all contributed to the increase in diabetes.

The all-natural compound of fruit extracts in Emulin® was created by 2015 and 2016 Nobel Prize nominee, Dr. Joseph Milton Ahrens. It activates numerous systems in the body to fight inflammation that can lead to diabetes, heart disease, bone loss and joint disease, COPD, and an increased risk of cancer. Inflammation has also been linked to depression and obesity.

Emulin Canada and Igalen no longer offers two formulas in the battle against diabetes they used to offer Emulin Plus M witch was designed for maintenance and Emulin Plus C witch was for control. The big news in the last months is that the scientists at Igalen decided to simplify the formula and now Igalen only offers Emulin Plus E (for everyone) there was a few small changes to the new formula has added Gallic Acid a polyphenol is found in almost all plants. It is an anti-oxidant and anti-inflammatory as well they have now changed the dose to two tablets a day making it easier then the before three tablets aday,

Emulin Plus E is still a vegan formula created for individuals who have inflammation and are in relatively good health as well provides people experiencing severe inflammation with a stronger formula.you body will only use what is needs It’s appropriate for those with diabetes, along with fibromyalgia, arthritis and Multiple sclerosis

Valentus Emulin C works in three ways. First it begins by inhibiting the transformation of starch into sugars in the mouth. Secound In the gut, it limits the amount of sugar that’s released, directing it to muscle tissue and aiding in the prevention of fat development. Thirdly, it increases insulin sensitivity for more effective use of the hormone within the body.

Offered by Emulin Canada, Emulin C is a revolutionary approach to managing refined carbohydrates, providing individuals with a new way to control blood sugar levels. Formulated from all-natural botanicals, it utilizes the bounty of nature combined with advanced scientific techniques to help people replace what we are missing in our modern diet .

Copyright © 2016 Kallyas | Hogash.com
This Demo is part of Kallyas Theme. All rights reserved.